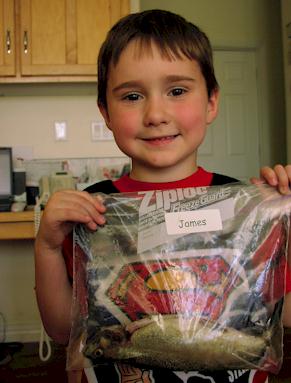 James’ Kindergarten class went on their first field trip today (Sept 17, 2004) to Spring Lake. Just about 20 minutes from Spanish Fork. Everyone went fishing and everyone caught a fish! He was so excited! And I was excited that they gutted the fish for me so I didn’t have to! We’re going to cook it up tomorrow night. I think it’s a Rainbow Trout. Should be pretty yummy. We’ll roast it over our fire. 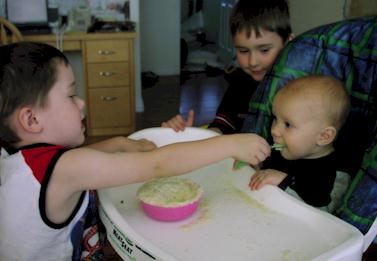 I had just finished feeding Benjamin his cereal, when I heard James calling me from the other room. I went to see what he wanted, then when I came back in the kitchen to a very funny sight. Anthony had dumped rice cereal flakes into the bowl (it was overflowing) and was feeding it to Benjamin. Benjamin kept smacking his lips to get some moisture on the dry flakes. When Anthony saw me come in he got a nervous look in his eyes as I said, “Oh Anthony!” But I reassured him that I wasn’t mad at him, and thanked him for wanting to be a good helper. (It’s something we’ve been working on with Anthony…giving him more positive reinforcement…basically trying to catch and praise him for doing something good.) 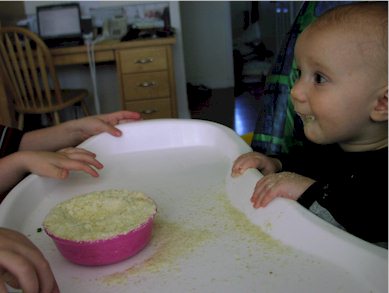 Benjamin smacking his lips from the dry rice cereal. 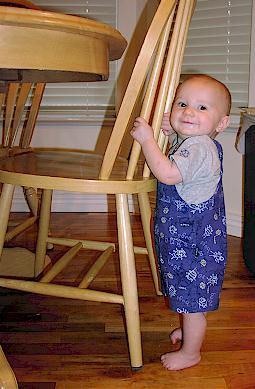 The week after our cruise, Benjamin started pulling himself up. Here you see how happy he is with his accomplishment! Hard to believe that he’s almost 8 months. 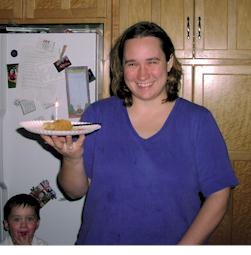 For my birthday I just wanted to be with my kids and family. Especially since James went off to Kindergarten for the first time today! On my birthday!!! Good thing it wasn’t my 30th birthday or it might have been harder than it already was! Julles orchestrated getting the evening party put together. Meika made dinner, Lynette brought side dishes. Julles and Meika made Chocolate cupcakes (what were they thinking?…they know I can’t have chocolate in large quantities because of Benjamin!). So I pulled out a Schwan’s pie to defrost and in comes Lynette with some of her famous Key Lime Pie (just as good, if not better, as the real stuff we had a couple weeks earlier). Julles said to me, “You were worried for a minute there weren’t you? You don’t think we would be that cruel do you?!” I should have known better. 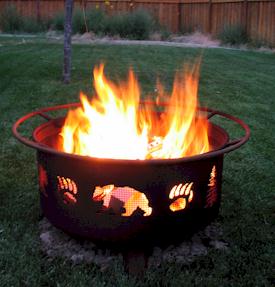 Dave decided to carry on a Leavitt family birthday tradition. Grandpa bought a piece of farm equipment for Grandma’s birthday, so she bought him a sewing machine for his birthday! So this year Dave bought me a firepit. He’s been wanting one all summer long. We were going to do a fancy cement firepit like at the campsites, and also cement in our side driveway. But I decided to spend it on a cruise instead! So Dave decided to go ahead and get that darn firepit he’s been wanting all summer. I must say that the enormous box that appeared on our front door step on my birthday was quite a shocker. I really had no idea what it could be. And I certainly didn’t expect a firepit for my birthday! But I do like it. We had smores, and a few other friends over including the Lewis’s. After the kids were in bed we had lots of fun burning…..stuff. 🙂 Those that were there, you know what I’m talking about…. 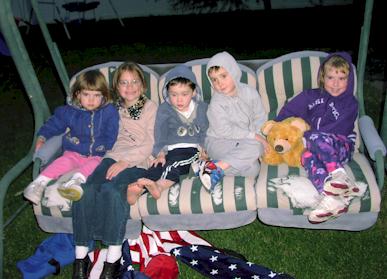 Amanda Lewis, Karalyn Lewis, Anthony notice he has no shoes? The boy refuses to wear shoes even in 60 degree weather!, James, Brynn Lewis 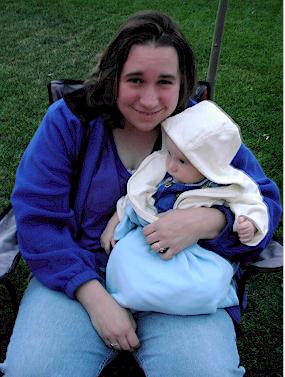 Benjamin looks so little in this picture, but he really is BIG!